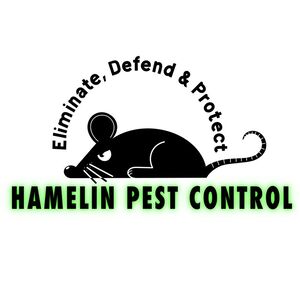 Rats. There are 2 main types of rat commonly found in the UK, the black and the brown rat. The colour of the rat is not necessarily helpful in determining the species of rat as both can be shades of brown. Adult rats are approximately 30-45 cm's long including the tail. Rats spoil foodstuffs, leave trails of excretion in their wake and spread diseases capable of infecting humans. In addition they can cause widespread structural damage, through their gnawing habits, in both domestic and commercial settings.
Lifecycle:
Rats are prolific breeders, becoming capable of reproducing from 2 months of age, they can have litters up to 6 times a year producing 8 or more young at a time. Rats live in outside burrows but do visit homes in search of food. Mainly nocturnal their numbers can increase significantly before they are detected but their tell-tale droppings can be an early sign.

Control:
It is possible to deal with small numbers of rats through trapping or bait traps. With major or persistent infestations disposal can be problematic and hence are best left to a trained pest control technician.

Mice:There are two types of mouse in Britain that are common pests. These are the house mouse and the long tailed field mouse. Adult mice can weigh up to 50g and are usually brown with a grey underside.
Mice like rats are a major health hazard and are responsible for the spread of many diseases some of which have been known to be fatal to humans. They contaminate the food sources they find and can also cause structural damage to a property by gnawing through wiring, pipework and other materials.

Lifecycle:
The more common pest, the house mouse as its name suggests prefers warm indoor environments and makes nests in cavity walls or under floorboards usually near hot pipework. They are most active at night and try to keep the nest close to their food source.
Life expectancy is approximately one year during which time a female can have up to six litters on average with six young per litter. With a good food source and undisturbed a house can become significantly infested within months.

Control:
Controlling a colony of mice will require professional help, the dificulty comes from the rate at which they breed, their sporadic eating habits and territorial behaviour. Keeping your property in good repair making sure that there are no gaps in brickwork or walls by which they can enter or move around is important as is making sure no food is left lying around the house or garden to attract them in. 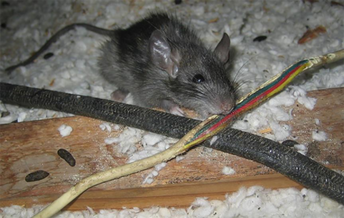 The threat to life is very real!